The Liberace Jewels
(Fri and Sat)

THE JEWELS ARE PART OF THE EXHIBIT ON FRIDAY AND SATURDAY ONLY – SEE BOOKING CALENDAR FOR DETAILS – The legendary jewels of Liberace were exhibited in 2017 at the Paris Museum of Modern Art, where they were heralded as the harbingers of hip hop style, and the designs of many current jewelers. In 2019 their exhibition at Monte Carlo Fashion Week in the Principality of Monaco was filmed for a major documentary.  Now they return to exhibition in Las Vegas at Liberace Garage, for a limited time only.

The creator of the primary jewels has been a mystery, but the Liberace Foundation has uncovered new evidence suggesting a celebrity designer.  Liberace Foundation Chairman Jonathan Warren will be presenting the new discovery, in our optional private tour add-on.

PLUS the unveiling new exhibits and artifacts recently acquired, exhibited every day:

Dozens of vintage photos of Liberace with Friends tell the story of his influences as well as his own influence on Las Vegas, show business, showmanship, and many artists.

In 2019 legendary Manhattan retailer Bergdorf Goodman celebrated the 100th anniversary of Liberace’s birth, and the exhibit of Liberace costumes at the 2019 MET Gala by licensing an unprecedented display featuring a giant graphic of Liberace, as the backdrop of their 14-foot tall 5th Avenue window.  The original graphic was donated by Bergdorf Goodman to the Liberace Foundation, and the massive window has been re-constructed at Liberace Garage.

Decades ago, Liberace had a plaster cast of an incredibly ornate French doorway installed in his home.  A direct copy of an ancient, ornate Bourbon royal entry, it became the entrance to Liberace’s dressing room.  Many years ago Nevada Lt. Governor Dr. Lonnie Hammargren installed the doorway as the entry to his closet in his famed museum home in Las Vegas.  Liberace Foundation Chairman Jonathan Warren obtained it from Dr. Hammargren in 2017.  It has been restored to its ultimate grandeur by Foundation designer Paulina Biggs Sparkuhl, and will be exhibited for the first time, installed at Liberace Garage as the gateway between our existing space, and our upcoming museum space.

The long-gone piano key-tiled pool at Liberace’s home in Las Vegas famously featured a candelabra cherub statue, lighting what Liberace called “The Dancing Waters” fountains.  Sold many years ago when the pool was demolished, the statue was recently located and donated back to the Liberace Foundation, and will be on exhibit at Liberace Garage for the first time in fully restored condition.

The Liberace Museum Walk of Honor

The original Liberace Museum was in Liberace Plaza, a shopping center owned by Liberace in Las Vegas.  Built into the sidewalk were 25 brass plaques, each with the Liberace signature and a commemorative date and accomplishment form years past.  This installation, the “Walk of Honor” was enjoyed by thousands who visited the Liberace Museum.  All but two of these heavy brass plaques were recovered by the Liberace Foundation when the Plaza was sold in 2013.  Two were stolen during the removal process.  The Walk of Honor will be exhibited throughout the Ultimate Influencer exhibit, as well as a photo of the two stolen plaques, for which a reward is offered.

Before Gloria Vanderbilt was known for designer jeans, she was an accomplished mixed media artist.  The book Collage describes her works, which are exhibited to this day at a galleries and traded around the world.  Her most elaborate work was based on Liberace and presented to him on the Mike Douglas TV show in 1970.  This large, complex, beautiful framed work has come to be known at “Mother and Child Prodigy.”  Liberace designed a room at his palm springs home around the piece, and it remains in the Liberace Museum Collection.  Photographs of this piece are not allowed.  This is a rare chance to view it in person.

This famous 7ft Baldwin piano was covered in individual, round-cut Austrian Crystals by Liberace glazer John Hancock in 1985, for Liberace’s Radio City Music Hall performances in New York. The piano was used by Ceelo Green in the music video of his single “I Want You” in 2011, and drew its largest audience ever when Cardi B borrowed the instrument for Chloe Flower to play in their 2019 GRAMMY Awards performance. 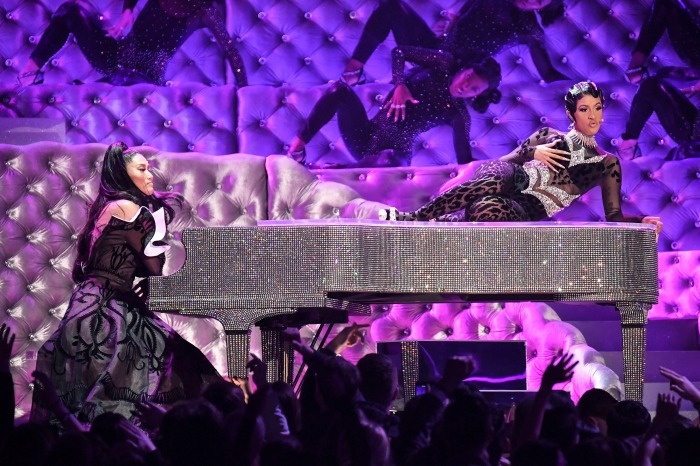 The glistening stage cars, chandeliers, and more from the Liberace Museum Collection

The all new Liberace Museum Store, immortalized by stage comedy of Jay Mohr

Our new, on-site coffee, hot cocoa and other temptations
And much more!

COVID 19 NOTICE AND IMPORTANT VISITING INSTRUCTIONS – WE ARE NOT MESSING AROUND: The Liberace Foundation takes very seriously the Covid 19 pandemic.  Gathering with others may cause transmission of the Corona Virus, which may transmit via air or surfaces.  All guests attend at their own risk.  All guests and employees must be masked unless seated and consuming food and beverage.  Social distancing of at least 6 ft. between each group is enforced.  We limit the number of guests in any group to six (6).  Distancing of more than six feet between parties in mandatory.  Please be cognizant of others attempting to maintain distance.  Passing other parties when traversing the exhibits is not allowed.  All tables used for food and beverage are sanitized between uses.  Our sanitation regimen includes disinfectant spray cleaning and UV light treatment on surfaces and in the air, which may take place in limited areas during your visit.  Our facility has 18 ft. ceilings and is well ventilated and exhaust fanned, with no air recirculation.  Our two low-touch unisex restrooms are kept immaculate, and have hands-free lights, soap and towel dispensers, and constant ventilation.