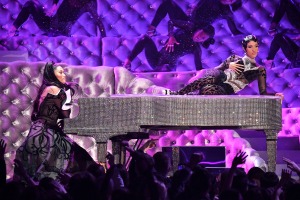 Having done more to bring Liberace to the forefront of pop culture in recent years than just about anyone else, Chloe Flower is now a New York City member of the Board of Directors of the Liberace Foundation.  It was Chloe who arranged for Cardi B to borrow the Liberace Crystal Piano for her 2019 GRAMMY Awards performance.  This garnered media attention from the TODAY Show to the front page of the Wall Street Journal.  Chloe played yet another of Liberace’s famous stage pianos in her 2020 music video, which was inspired by her time in seclusion during the worst of the Covid 19 pandemic, “Flower Through Concrete.”

“Chloe has been helping the Foundation from behind the scenes since 2015,” remembers Liberace Foundation chairman Jonathan Warren.  Anyone who has paid attention can see how. She almost single-handedly sponsored 2017’s 6-month exhibit of Liberace’s jewels at the Paris Museum of Modern Art, and was the sole sponsor of the Liberace costume exhibit at the Met Gala and the Metropolitan Museum of Art in New York in 2019. She rallied French Montana to donate studio time, Chris Rock to contribute VIP tickets with a meet-and-greet, and even donated a private piano lesson herself.  Each experience garnering thousands at auction.  Others donated cash.  Warren could not be more clear: “We never would have made it to Paris without Chloe Flower and her loyal friends.”

Known to many as the “Millennial Liberace,” Chloe was selected as a Steinway Artist recently, but has been produced by her mentor, Kenny “Babyface” Edmonds for years.  In 2018 the Liberace Foundation loaned her the Liberace Baldwin SD10 9′ mirrored concert grand piano, designed by John Hancock, for positioning in her high rise apartment in Manhattan, with New York City in the backdrop.  There Chloe brings the style and passion of Liberace to a new generation of aficionados, in her videos and photos via her Instagram feed. Her arrangement of piano classics fused with pop and other styles has become a genre of its own, now known as “Popsical.”

Chloe explains, “Liberace was at once groundbreaking, expressive and defiant. His genius lives on in the many artists and entire genres he influenced. I am honored to have a hand in the ongoing work of his Foundation.”

“She’s a natural, obvious choice.” Says Warren. “This is a society woman in Manhattan, who takes a piano into underfunded public schools in Compton, and places kids have never touched an such instrument.  She’s a leader in music education and in music therapy.  This kind of talent and drive combined with the legacy of Liberace makes for a world-changing combination.  Lightening flies from her fingertips, but when you see how little girls around he world are dressing like her and telling their parents they want to play piano, well, lightening strikes again.”

Liberace is certainly smiling at this latest appointment to what has become an all-star Board of Directors at the Liberace Foundation for the Performing and Creative Arts.