The former Deputy Secretary of Tourism for New Mexico, a member of the trailblazing Las Vegas hotel and casino family, has been working behind the scenes with Mr. Showmanship 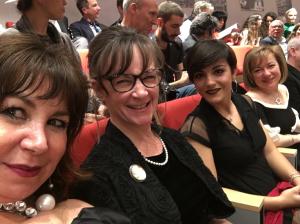 When Monte Carlo Fashion Week 2019 themed itself Liberace100, in celebration of the Mr. Showmanship’s 100th anniversary, fashion designers upped their runway game, the bling was polished, the Liberace Jewels went on exhibit, and an entourage from Las Vegas came ready to represent.  One key personality representing the desert city to the Mediterranean enclave was Sharon Maloof.  The celebrations brought about introductions to Liberace Foundation Chairman Jonathan Warren and members of the Liberace family.

“Suddenly Sharon was hosting a night at the Casino Monte Carlo,” says Jonathan, who also happens to be the Honorary Consul of Monaco in Las Vegas, “The next thing I knew, she was helping us get a street named for Liberace in Vegas,” he continues, “Then she was getting one of our supporters, who is a famous organist, a tour of her uncle Phil Maloof’s collection, where the guest even played the legendary Roxy pipe Organ.”

A twenty-five year veteran of the New Mexico  Department of Tourism, Sharon Maloof also represented the greater southwestern US via the United States Tourism and Travel Association.  This put her in over 100 embassies around the world as well as with countless travel journalists, agents, and tour operators.  Sharon always presented Las Vegas as the Gateway to the West.

The Liberace Foundation is thrilled to have Sharon Maloof join the team!